skip to main | skip to sidebar

Online TV Player lets you watch 850+ free Internet TV and listen 1500+ free online radio stations on your PC. It allows watcher to watch directly into TV without having to experience the annoyances of a Web site (like slow-loading pages and pop-up ads). No additional equipment required. Online TV Player support both Windows Media and Real Video. You can play most of stream formats in one program. It can set the screen window to any size that you want. It supports full-screen mode too.
Posted by Ari at 8:38 PM 1 comment: 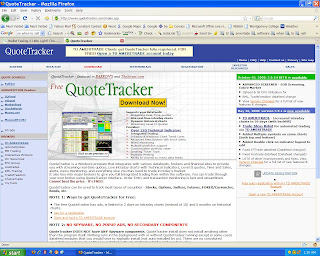 Wallet Feeling A Little Light? Check Out The Expense Tracker

With the economy slipping closer to rock bottom every day now, many of us are going to have to start cutting back on our day-to-day expenditures. Cue Voice2Insight’s The Expense Tracker

, an online expense tracking system that makes entering every transaction as easy as calling a phone number and saying a few words.

Most expense trackers require users to input their daily transactions from their computers, which is time consuming and requires an impressive memory (or very organized receipts). Voice2Insight’s system allows users to call a designated number, where they’re prompted by an automated system to state the amount they’ve just spent and what category the transaction would fall under (for example, I might say “Groceries, $50″). And if you forget to leave one of the voice messages, you can manage your account from the computer as you would with a traditional system.

The service costs $15 a month ($10 if you buy six months at a time), which may be too steep for some people. I think The Expense Tracker would probably be better off adopting a model similar to Mint

, offering ads for targeted financial products based on spending habits. Then again, paying for the service may make users feel obligated to use it religiously (some people swear by expensive gym memberships for this reason).

Other companies in the expense tracking space include Expensify and ShoeBoxed